As It’s still quite cold with the nights frosty and the water temperature low, choosing the right water is paramount. I find the shallower water's better with the carp well catchable, especially with a lighter more bitty approaches meaning scaling things down and using smaller baits, naturals etc..

The water I chose was shallow, well very shallow compared to the deep wily gravel pits I'm used to fishing, around 4-6 foot deep. It has a good stock of fish, mainly mirrors but with some lovely commons in there as well. I decided to go with maggot approach as I've done quite well in the past with this method. I went to the tackle shop and bought half a gallon of white maggots, it is quite a lot for a day session but I intended to try and find the fish the day before and prep the spot with two pints. You might ask why I have chosen white maggots and not mixed or reds, well the spots I am fishing and generally most of the lake will be dark in colour with silt, rotting weed and the white maggots stand out very well over the hard silt spots. I normally put half of the maggots in the freezer to kill them and have the other half keep alive, I do this to make sure I definitely have some of the bait visually around my hook bait because if the silt is a bit soft in places the maggots can bury themselves out of sight. The maggots do tend to seize up in the cold water and not move much but I just want to make sure.

The day before my session I was quite lucky as it was high pressure and sun making it easier to try and find them with a good pair of polarised glasses. Normally at this time of year if you find one you find all of them, most of the time they will be on the back of the wind in the calmer water, behind islands, under snags etc, but can be right in the teeth of a cold wind. Well after an extensive look around I found what I could just make out in the depths as a good fish sitting next to a snag, that was good enough for me as I was certain the rest of them wouldn't be far away. I put a hand full of bait in next to the fish and he didn't move an inch, so I quietly put the rest of the maggots in with a smallish spread of around 2-3ft square.

Arriving the next morning I set up in my chosen area, I had a quick look where I had seen the fish but didn't see anything, it was cloudier today which was better than the high pressure of yesterday and with nothing else to go on it was still my best option. I cast my rig onto the area which was a 3oz flat black pear lead, black lead clip, a small size ten wide gape tied to 5 inches of 15lb black braid. The way I mount the maggots is I hair rig a piece of yellow fake pop up corn lengthways ,with the smaller end closest to the hook ,then thread 6-10 maggots onto a 4 inch length of cotton using a sewing needle, bunch the maggots into the middle, thread one end of the cotton into the hair loop then gently tie together, doing it this way it will act as the hair stop, then push the corn up to the maggots. Mounting them this way, the corn will keep the maggots away from the hook stopping them from twisting around the hook which I find can happen with a mag clip.

The day went by pretty uneventful not even seeing a fish, the lack of visual activity doesn't really bother me to much as the best time I find normally being the first two hours of darkness.

An hour into darkness the left-hand rod pulled up tight and stopped, a typical cold-water bite, I leant into it and after a short sluggish fight a lovely mid twenty common was in the net, on the scales she went just under 26lb, I was over the moon. 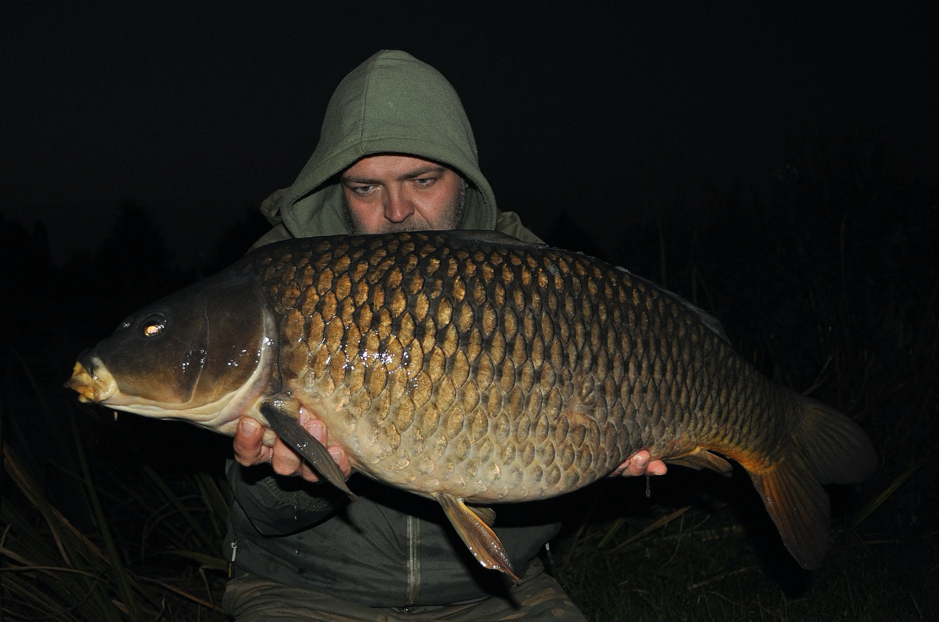 After a few quick self takes I clipped up and dropped the rig back onto the spot, I was confident that I might get another one and I wasn't wrong, the same rod pulled up tight again and I was into another fish, this time of year can be like this, with the feeding time localised to a short space of time in a 24hr period, sometimes only minutes.

The fish was in the net after a short, again sluggish fight, at first, I thought I had caught the same fish but after close inspection this one was a bit bigger, going 29lb on the scales. Another mint common banked, I was blown away, especially at this time of year, it just goes to show that some good results can be had in the winter they can just can be a bit far and few between. 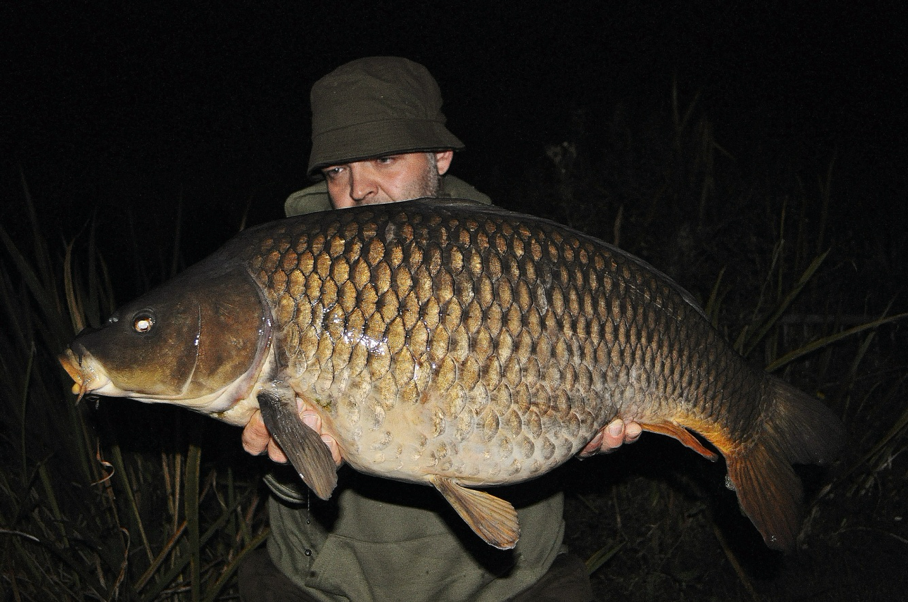 I was packing away a very happy angler, having had a mid twenty and upper twenty common and with it being as cold as it was, around freezing point, this was a right result. It is always a great feeling when everything goes to plan as in the winter it doesn’t normally go the way you plan it but when it does it makes all that sitting around in the cold worthwhile.

All the best, Ricky.

An obsession with big carp.